The “97% Climatologist agreement” claim is based on the fact that 97% of related a articles published in peer-reviewed journals and that actually take a position in their abstracts agree that climate change is real and largely caused by humans.  Most “counterarguments” omit these specifics.  Other studies have reached similar conclusions.

In reality, seven separate studies/surveys have shown a consensus among climatologists. These studies were conducted by:


However, most critics seem to only know about John Cook’s or conflate Cook’s study with a different one (for example,

The “97% climate change consensus” claim is based on (multiple) studies of climate change papers submitted in peer review journals (meaning, scientific journals where other subject matter experts can critique it). 97% of these papers with abstracts that actually take a position on the whether climate change is real and caused by human activity do so in the positive.

The fact that this is specific to papers whose abstracts take an actual position is relevant here. On one hand, it’s generally regarded as fact among climatologists that this climate change is real, and largely caused by human activity, and there is no need to take a “position” (imagine Paleontology papers taking an assertive position on evolution; There is simply no need to at this point).

“The climate change consensus is only .5%”

One of the “counterarguments” is that only .5% of peer reviewed papers agree that climate change comes from humans. This is technically true since most of these papers don’t take an actual position in their abstracts. The fact is that the 97% specifically takes into account papers that actually take a position in their abstract. The “.5%” argument omits this fact and leaves the reader without an understanding of this distinction, leading them to believe that all of these papers actually cite a position on human caused climate change, and that only .5% are in agreement.

“The Consensus is based on self selection”

Another argument is that the Cook study somehow self selected “participants.”  It’s clear that the selection process likely had the effect of downplaying the consensus.

We took a conservative approach in our ratings. For example, a study which takes it for granted that global warming will continue for the foreseeable future could easily be put into the implicit endorsement category; there is no reason to expect global warming to continue indefinitely unless humans are causing it. However, unless an abstract included (either implicit or explicit) language about the cause of the warming, we categorized it as ‘no position’.

A team of Skeptical Science volunteers proceeded to categorize the 12,000 abstracts – the most comprehensive survey of its kind to date. Each paper was rated independently at least twice, with the identity of the other co-rater not known. A dozen team members completed most of the 24,000+ ratings. There was no funding provided for this project; all the work was performed on a purely voluntary basis.


Once we finished the 24,000+ ratings, we went back and checked the abstracts where there were disagreements. If the disagreement about a given paper couldn’t be settled by the two initial raters, a third person acted as the tie-breaker.

The UN Climate Head, Richard Tol agrees that there exists a consensus but specifically disputes John Cook’s methodology for arriving at 97% of peer reviewed papers taking a position.  Nevertheless, the idea that the UN climate head disagrees that there exists a consensus has been incorrectly thrown around.  Furthermore, Cook has published a response to Tol’s criticisms, standing by his methodology, and other follow up studies appear to have vindicated Cook. 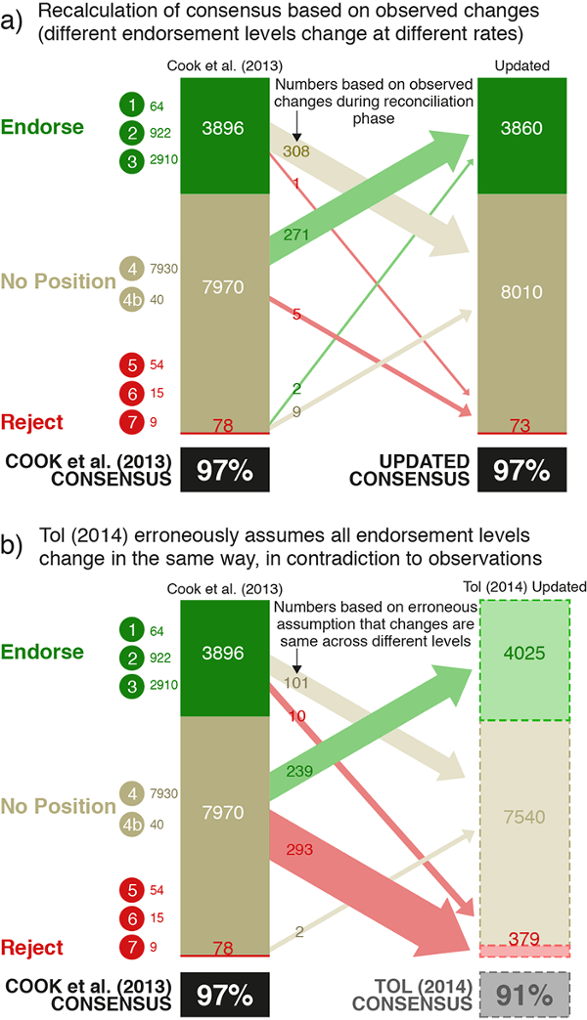 Rick Santorum is quoted as saying that “the 97 percent figure that’s thrown around, the head of the UN IPC  said that number was pulled out of thin air. It was based on a survey of 77 scientists.”  Santorum is conflating different studies and misquoting the UN Climate head.

The consensus among climatologists often gets conflated with a consensus among “scientists.” In reality, “science” is a broad term encompassing countless, often unrelated disciplines. What a biologist or geologist has to say on climatology matters about as much as what a dermatologist has to say about a complicated orthopedic issue. When our car or truck breaks down, we take it to a mechanic, not a roofer, and for a very good reason. We trust specialists because they’ve spend the necessary time undertaking a topic.

The importance of Peer Review

Peer review allows for other subject matter experts to critique a paper’s validity. This occurs in all fields of science but is made to appear controversial by science deniers when the subject becomes a matter of politics, ideology or religion. And because the general public isn’t commonly exposed to the process, they are often misled by science deniers.